Chuck
Robbie and I have been breeding Cavaliers since 1991. So far,we have bred 15 Champions and two Grand Champions; however, our focus is to produce the finest companion dog and the best socialized addition to any family.

Aubrey had her pups on April 9, 2012.  She had two girls and a boy. All are doing well. Needless to say, Robbie and I have been a little busy for the past month (not to mention Tory and Aubrey).Thie photo was taken when the pups were just a day old. 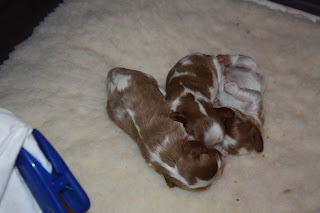 There's so much to tell, I'm not sure where to start. So I'll start with puppies, YEA! Tory had five Blenheim puppies on March 30, 2012 - four boys and a girl. At four weeks and a couple of days, they're doing fine. The photo on the left was taken when the pups where a few hours old, and the photo on the right was taken when they were a few days old. (Just double click to make a photo larger.)
Posted by Chuck at 2:07 PM No comments:

We have two litters of Blenheim (chestnut and white) puppies. Tory has five puppies four weeks old, and Aubrey has three 1puppies two weeks old. I'll post more about these litters soon.
Posted by Chuck at 11:44 PM No comments:

I'm pleased to announce Sarah (in the middle in the puppy photo below) is, as of last weekend, an AKC Grand Champion. Out of the three puppies in Tennie's last litter, two are now Grand Champions. So far, in 2012, Mayfair Cavaliers has finished two of our young girls as Grand Champions.Tennie is hoping her last litter will be a Hat Trick when Ch. Dashwood resumes his show career.
Posted by Chuck at 11:38 PM No comments:

Great news! Pixie, Sarah, and Dashwood are littermates out of Ch. Mayfair Tenniel (Tennie) and Ch. Mayfair Maxwell. Dahswood has been an AKC Champion since early January 2012. Pixie became a Champion in October 2011, and Sarah became a Champion in late February 2012. Pixie became a Grand Champion in late February 2012. As of March 23, 2012, our little Pixie was the number 2 overall Grand Champion points earner in California as well as the number 1 female Grand Champion points earner in the state. (Dashwood is on the left, Sarah is in the middle, and Pixie is on the right.)
Posted by Chuck at 12:55 PM No comments: