Chuck
Robbie and I have been breeding Cavaliers since 1991. So far,we have bred 15 Champions and two Grand Champions; however, our focus is to produce the finest companion dog and the best socialized addition to any family.

Our Thanksgiving Blessings: two gorgeous little boys... In the first photo, they're two weeks old; and in the second, they're four weeks old. It's fascinating watching them grow so fast, both mentally and physically. In the first photo, they're about 7.5 oz. each. In the second, a mere two weeks later, they've grown to about 1.5 pounds apiece. In the first, their eyes and ears are closed and they use a swimming motion to move around their whelping box. In the second photo (a mere two weeks later), their eyes and ears are open, they're walking (more or less) upright on their four paws, and they've become aware of their littermates. And, as you can see, they're already beginning to look like little dogs - and very pretty ones at that. Will keep you posted.

OUR BEST WISHES FOR THE HOLIDAY SEASON AND A HAPPY, HEALTHY NEW YEAR. 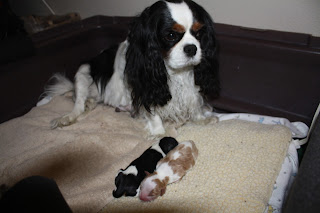 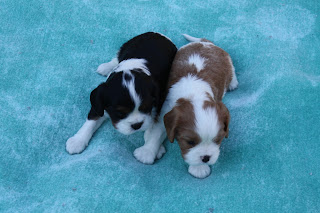